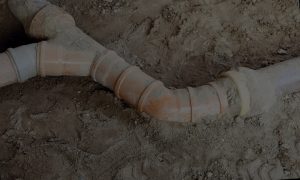 If you have a septic system you have probably had an issue and that issue could have been the result of a well intentioned tree in your leach field. These trees can be disruptive in many ways, but the most damage they can do is though their roots. If a tree is allowed to grow unhindered in a leach field, the results can be catastrophic. Broken drain pipes, leaking tanks, and many other issues can occur with trees invading the leach field. It’s helpful to plan ahead if you’re landscaping around your leach field.

Leach fields began in the mid 1800s as almost an accident. A normal guy named John Mouras came up with the idea without realizing at the time what a great idea it was. He buried a concrete tank in his yard and went about life as normal. Ten years later John opened the vault and observed that the solid waste he expected to be there was not present. As awesome as his invention was, he will forever be known as the father of the septic system. Both a blessing and curse is what that sounds like. Anyway, the original pipes for Mouras’ septic drain field were made of clay and could have provided much more protection from intrusion from roots and other undesirable things. 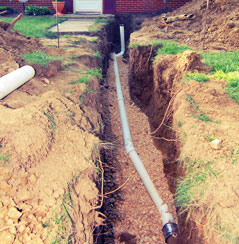 Today many times the pipes in a leach field are made of corrugated plastic pipes with drain holes in them. These pipes generally do not fare well against tree roots and can mess up the whole system. Recently, there has been a push to utilize synthetic and alternative forms of media for the drainfield. Traditionally leach fields are comprised of a porous pipe that is surrounded by small gravel known as squeegee. Advancements have yielded systems that are not utilizing a porous tube but plastic media in socks that allow the wastewater to leach into the ground. Not only are these more efficient but they are much more resistant to damage.

Keeping trees outside of your leach field can be a real pain and many times volunteer trees can invade. Drainfields by nature are excellent places for plants to grow. The wastewater provides an amazing source of nutrients for plant life and their roots actually have an impact on absorption of the waste. You will find that the drainfield is many times covered in lush green grass most of the year. As you can see, this is incredibly attractive to trees and provides an excellent water source if a seed happened to take root. Every so often it is a good idea to spray down your drainfield with weed killer that is safe for grass, as most of those products will kill unintended trees while keeping the grass intact.

Pumping is the Key

Always remember that keeping your leach field in the best condition it is critical that your tank be serviced at regular intervals, say every 3-5 years. B&B Pumping is your local septic service company and we are here to help. Many times we are able to fit you in that same day. We work on septic tanks throughout Fort Worth, Decatur, Azle, Haslet, and Weatherford — feel free to take a look at our service area and give us a call to schedule an appointment. We look forward to hearing from you, and thank you for your business!